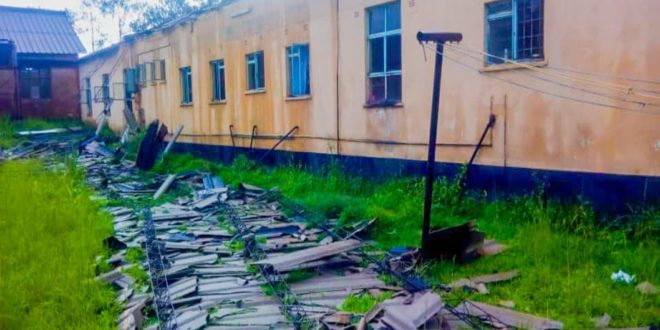 The entire roof of the hospital’s maternity wing and trusses covering an area of 768 sq. metres were blown off during a heavy storm on March 8, 2019.

Following discussion with the provincial administration, the mining company assessed the damage and stepped in to replace the entire roof, along with comprehensive repair work at the hospital.

The major construction work was completed in 2019 and included reconstruction of the walls to support a new roof, replacement of the entire roof structure and all roofing sheets, removal of PVC floor tiles and installation of a safer epoxy floor, new doors, bathtubs, toilets and hand washbasins.

Speaking after he handed over the maternity ward to North-Western Province Minister Hon. Nathaniel Mubukwanu, Kansanshi Mine Assistant General Manager John Gladston said that besides the repair works, the mine procured new incubators, a special maternity bed for the labour ward, and other beds and mattresses for the rest of the wards.

Amongst the company’s core values, FQM places health and education first, as these are critical factors to the sustainability and development of the communities around its mining operations.

All the health projects undertaken by FQM in Solwezi have been done in close partnership with the Ministry of Health and the community, as these are ultimately the beneficiaries of improved health care, said Mr Gladston.

He further said that, as parents, we all want and expect mothers to give birth in clean and safe surroundings and that the revamped maternity ward provides such an environment. In addition to that, it also represents a huge improvement in the Solwezi General Hospital’s service delivery.

In conclusion, Mr Gladston thanked all the health workers who staff the maternity ward for their unrelenting support.

The reconstruction works and equipment cost US$250,000, of which US$170,000 was provided by Kansanshi Mine and the remainder by partners including Total Zambia, Mary Begg Community Clinic, Olibul Investments, Jachris, Quattro Bus Services and Mr Clean.

The mining firm has also dealt with the problem of limited water supply to the hospital by sinking a borehole and equipping it with a submersible pump, ensuring the maternity ward has a constant and consistent supply of water.

This is not the first time Kansanshi has come to the aid of Solwezi General Hospital. In 2013 the company pumped K12 million into the upgrading of the facility to turn it into a modern health institution.