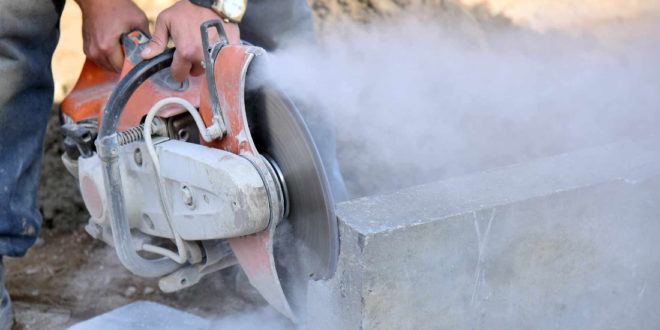 If you decide to take a walk along a sandy beach, you will be walking on millions of particles of crystalline silica, one of the most common minerals and an important element in the glass and ceramic industry.

While it exists in nature mainly as quartz, silica is also used in manufacturing building materials, foundry and respirable silica dust is produced during mining activities.

Any occupation which involves the handling of rock, bricks, sand or deals with quarrying or drilling brings along the risk of silica exposure and could eventually lead to developing serious illnesses such as silicosis, lung cancer or pulmonary tuberculosis.

Crystalline silica becomes hazardous when it is broken down in very small particles that are breathable.

The respirable crystalline silica dust elements are almost 100 times smaller than a grain of sand and they can be released into the air when rock or products made from rock are cut or crushed.

Respirable dust can reach deep into the lungs and while the body’s natural defense system can eliminate much of the inhaled particles, in case of prolonged exposure, it can become difficult to clear all dust from the lungs, fact that can lead to irreversible health effects.

Exposure to respirable crystalline silica over many years can be quite harmful to an individual’s health, having the potential to cause all sorts of dangerous diseases, especially among those who work in the mining or ceramic industry.

Silica exposures continue to be a serious threat to almost 2 million U.S. workers, including those who have high risk jobs such as tunneling, stonecutting, rock drilling or mining and even electricians.

The severity of the health dangers that come along with silica exposure is indicated by the number of fatalities and illnesses that continue to occur.

Silica – breathing crystalline silica dust can cause silicosis, a disease that can prove to be fatal in its severe forms. Silicosis usually appears after 15-20 years of occupational exposure. Symptoms are not always obvious, so workers need to undergo a series of tests to determine whether there is lung damage. As it progresses, the illness can lead to shortness of breath, fatigue or persistent cough and unfortunately there is no cure, but certain treatments can ease the symptoms.

Lung Cancer – Prolonged exposure to respirable crystalline silica can also increase the risk of developing lung cancer, a disease where abnormal cells grow uncontrollably into tumors, affecting lung function. As it has the potential to metastasize and cause damage to other organs, most cases are not curable.

Recent evidence points out that long term occupational exposure to respirable crystalline silica brings along an increased risk of COPD as well.

Employees that work in the glass and ceramic industry, in the maritime industry, in mines, cement manufacturing or jewelry businesses are prone to suffer the most severe exposures.

“It’s actually amazing that many enterprises still treat the threat of respirable crystalline silica so negligently, frequently omitting to properly inform their employees about the risks that come when working with this hazardous mineral.

“We all know that the first effects may appear only decades after the first exposure, but that does not mean that the responsible companies should not pay compensation to the victims of their recklessness,” stated Gregory A. Cade, chairman of Environmental Litigation Group, P.C.

There is no safe amount of silica dust, as this mineral is a carcinogenic agent, recognized by multiple health agencies around the world.

Still, the duration of the exposure and the amount of particles are important factors in estimating the risk of developing related diseases in the future. Therefore, occupational silica exposures are considered to be the most dangerous.

Gregory A. Cade is currently the chairman of Environmental Litigation Group, P.C., which he became a member of in 1993 as a litigation paralegal. He followed a master’s program in Occupational Health, Safety and Industrial Hygiene, which now helps him to better deal with injuries that occur from the exposure to asbestos or other toxic materials. Despite the fact that cases involving asbestos are very complicated, the attorney strongly believes his career is rewarding, as he can help a lot of victims and their families recover compensation for their suffering. While time consumption and huge financial risks represent quite enough reasons for most law firms to refuse environmental cases, Greg’s passion, patience and experience make him a strong and efficient help for people who were harmed by dangerous substances.