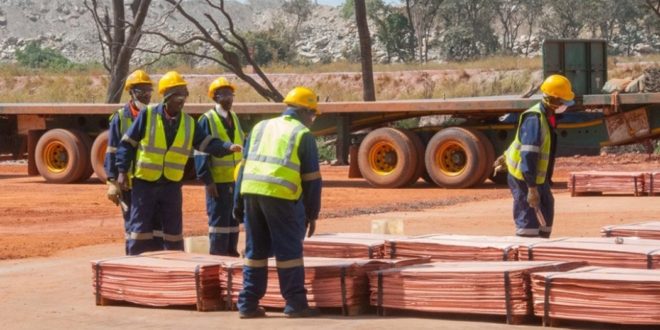 Kalumbila Minerals workers are set to get a 6.5 per cent pay rise and improved benefits package.

This is after Kalumbila Minerals, a subsidiary of First Quantum Minerals (FQM), signed a new collective agreement with three unions giving workers an enhanced package of benefits for 2020.

“What we do at Kalumbila is mine copper. And as a subsidiary of First Quantum, we are proud at Sentinel to have the best mine in the country, we have the best people, we have the biggest equipment. And with that mix, we will be the top producer in Zambia,” he said.

Speaking at the signing ceremony, Rowe also said the agreement was an important part of ensuring fair play, quality employment and equal treatment of employees in the mine.

“As Kalumbila and First Quantum Minerals, we always honour the documents that we sign. I have seen over the last few years I have been the leader at Kalumbila Minerals that our relationship between management and workers has improved substantially, through dialogue; through tabling of issues; how we resolve them, and most of all the union leaders at the mine are prepared to come, meet, discuss and implement what we decide at those meetings,” said Mr Rowe.

Speaking on behalf of three unions, National Union of Miners and Allied Workers president, James Chansa, said the unions were happy with Kalumbila management for their support towards union members.

“We have agreed to go the route of dialogue because we believe that out of the dialogue, the best results are achieved. And even as we talk about dialogue, we have emphasised that no one must take advantage of this, because much as we may say we have run away from the spirit of fighting, we have in us teeth to bite in case someone oversteps the boundary,” he said.

Mr Chansa said the unions will respect the content of the new collective agreement, and that it is only through dialogue that the best results can be achieved.

“It is for this reason that we want to pledge with you as well as the government, that we will do everything possible to help shape the economy of Zambia, which largely hinges on mining activities,” he added

He said it was the duty of unions to ensure that workers’ rights were protected and decisions were made in the best interest of workers.

And NUMAW Kalumbila Branch Chairperson Teddy Mwasha said unions played a role in ensuring that there was harmony in the workplace between management and employees.

“Without that proper relationship between the management and the union, we may not have the wonderful relationship in the place of work,” he said.