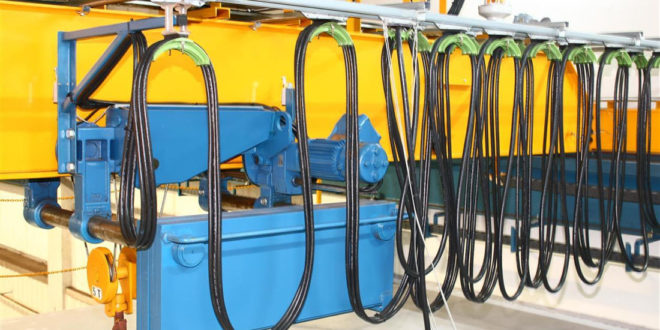 Global player in the crane industry Demag has developed a new Double V-Girder crane which is capable of a 50T lifting capacity – four times that of the Single Girder.

According to the company, the double-girder overhead travelling cranes offer exceptional load capacity for a low deadweight.

In addition the outstanding crane’s geometry also provides for extremely good travel characteristics, which minimises wear on the end carriages and crane runway.

On the other hand, the load hook can be raised between the two crane girders, which allow large lifting heights to be achieved while offering high long and cross-travel speeds, thanks to high-performance double-girder design.

The girders can be adapted to building structure requirements and has minimum approach dimensions thanks to the compact travelling hoist design.

“Since the launch of the V-Girder in 2016, 60 percent of all our single girder cranes produced locally are now V-Girders”, said Richard Roughly, Senior Manager: Sales & Marketing at Demag South Africa.

“They have revolutionised load handling”.

Duoble V-Girder’s innovative design featuring tapered diaphragm joints reduces oscillation frequency by 30 percent, cuts its weight by an average of 17 percent and doubles its service life to as many as 500 000 changes of load.

The revolutionary design enables sensitive loads to be positioned more precisely, carefully and also speeds up the process. It allows for particularly precise and careful positioning of sensitive and heavy loads.

It improves efficiency and simplifies installation thanks to more lifting points. From a safety point of view, the V-Girder’s Surface area exposed to wind is reduced by up to 55 percent. It also offers a much improved view for the operator.

“Our eco-friendly utilisation of re¬sources is reflected by the use of less material, reduced drive output requirements, blast cleaning of metal parts with dry ice and the use of water-based paints,” Roughly adds.

Demag is one of the oldest crane manufacturers in the world established almost 200 years ago.