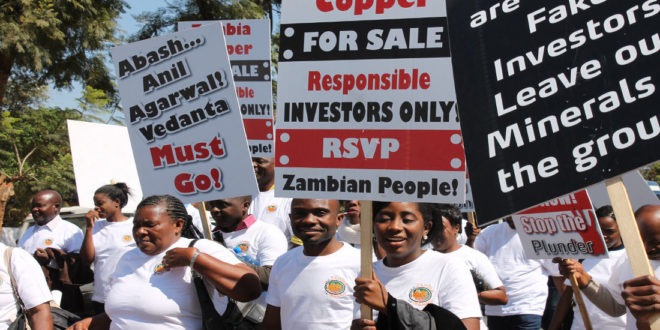 The Mine Unions and various stakeholders in likes of miners, former miners, residents of Chingola and Chililabombwe took to the streets a solidarity demonstration as a show of support for government’s intervention in the Konkola Copper Mines issue.

Joseph Chewe, the Mineworkers Union of Zambia president, charged that Vedanta Resources had failed the people of Chingola, Chililabombwe and Kitwe.

Mr Chewe led a group of youths and other three union leaders in a solidarity walk to deliver a petition later to Copperbelt Minister Japhen Mwakalombe at the District Commissioner’s office in Chingola.

He also advised government not to bring in Chinese to run the mines but look at other serious investors.

“We have come to deliver this petition, we heard what the President said and we are in support of what he mentioned. It is for this reason that we want Vedanta to go; time for them to pack is now, we are tired. Enough is enough, we can’t continue like this,” Chewe said.

Chewe said that there was need to consider fencing off Konkola Copper Mines until another investor is identified.

Furthermore, Mwakalombe alluded that government had already made a decision hence, necessary steps in taking over KCM will be followed and that the petition will be presented to the Head of State.

According to media reports, an urgent meeting has been sought by Vedanta Resources to converse about President Lungu’s position that they vacate the mine.

The Presidential spokesman Amos Chanda yesterday told Reuters a notice had been issued to KCM in April last year over a number of breaches of the terms of its license and it had not convinced the government it should keep the license.

He also said “about three investors” whom he declined to identify were interested in the asset, but no formal negotiations had begun.

Silavwe called on President Edgar Lungu to appoint a high-level task team with extensive expertise in mining, management and economics to come up with best modalities to run  KCM profitably and re-examine all the existing mining agreements.

He added that a report of a technical audit committee chaired by Dr. Sixtus Mulenga showed that KCM was heavily in debt and faced threats of insolvency as at September 30, 2013, and had maintained the same status for six years.

“Zambians are yearning for real economic development powered by their own abundant natural resources. The now Zambian is not afraid to run his own economic affairs. All the minerals belong to Zambians, the foreign investors must share the wealth or leave,” said Silavwe who is also ZCID spokesperson.

He further called on government to conduct forensic investigations and prosecute Vedanta Resources Limited for abrogating the agreement.

The Zambian government has been urged to run KCM professionally and avoid political patronage.