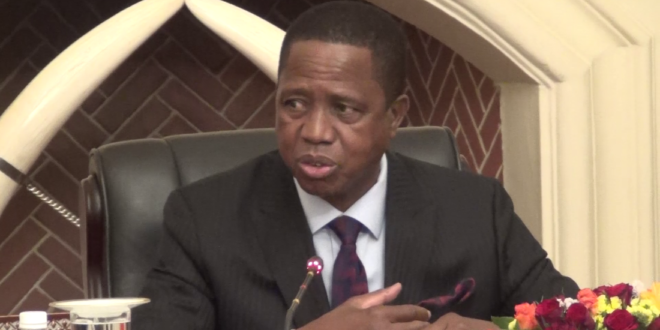 The President of Zambia Edgar Chagwa Lungu has travelled to the Copperbelt where he is scheduled to meet stakeholders in the mining sector.

According to media reports, the President’s visit has come at a time when people on the Copperbelt need assurance from the head of state.

This follows the attitude displayed by mining companies which has created uncertainty in the country, particularly among employees in the sector.

Earlier last week, Mopani Copper Mines management announced the shutting down of two of its supposedly uneconomic units, namely Mindola North and Central shafts, that they had outlived their useful lifespans.

Reports also indicate that Barrick Gold Corp is planning to sell Solwezi- based Lumwana Mine in the second half of 2019.

Konkola Copper Mines in Chingola has been downsizing the mine’s workforce apparently in an effort to stay afloat.

Though Zambia is internationally recognised as a major producer of copper and cobalt and ranked as the seventh and second highest world producer respectively, it has struggled to obtain significant benefits needed for its development agenda.

Government, under the leadership of President Edgar Lungu, recognises the fact that the country has been getting a raw deal from its mineral resources, due to overly generous tax incentives.

Regardless of the over-generous tax regime which has seen mining companies reap colossal sums of money through value added tax refunds, these companies have also been known to evade tax by under-declaring production and profits.

In a video which was circulated by activists from Foil Vedanta, Mr Agarwal told a large audience how he bought Konkola Copper Mines for just US$25 million, rather than the asking price of US$400 million, for which he received loud cheers after disclosing the US$500 million annual profits being made from Zambia’s natural resource.

While Mr Agarwal was making these revelations, which tied with Foil Vedanta’s figures from the mining corporation’s annual reports showing that the company made US$362 million in 2013, then CEO Tom Albanese disputed these figures during his visit to Zambia that same year.

He claimed that KCM was making a very low profit or a loss due to high operational costs and taxes.

It is with much note and comforting that the head of State’s meeting with the mining sector’s representatives will be fruitful and bring hope to Zambians.