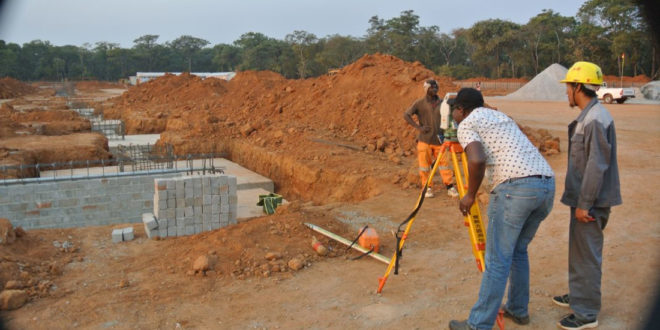 The Chileans are here

Right now, it’s little more than a hole in the ground; but six months from now, in the first quarter of 2018, this dusty building site in the North-Western province town of Kalumbila will be a $40-million manufacturing facility producing high-quality mill-balls for mines in Zambia, neighbouring countries and the world market.

Kalumbila Town is a purpose-built town planned and funded by First Quantum Minerals (FQM) to support its Sentinel Mine, which started operations in 2015. The town’s long-term ambition is to become economically self-sustaining so that it does not depend on the mine for its existence. An industrial zone, aimed at attracting investment through various incentives, is a key part of this strategy.

“This Chilean investment is a game-changer on so many levels,” says Michael Kabungo of the Kalumbila Town Development Corporation – the organisation that is responsible for developing Kalumbila Town. “Chile’s M.E. Elecmetal is one of the world’s leading mine suppliers; their investment is a demonstration of faith in the long-term potential of the town’s industrial zone; and it is a catalyst for further investment.”

Mill-balls are made of high-quality, hardened steel, and are a critical element of mining. They are used in giant rotating mills to crush copper ore prior to further treatment. Zambia’s mines currently import their mill-balls from China. And because the balls wear out and need to be replaced regularly, mines keep up to four months’ of stock on hand; this ties up millions of dollars in working capital that could be deployed elsewhere in the business.

The investment is a game-changer on so many levels

The finished plant will enable mines in Zambia – and neighbouring countries such as the Democratic Republic of Congo and South Africa – to procure their mill-balls at lower cost and on shorter notice, because of the proximity of the plant to their operations. The M.E. Elecmetal plant will be operating in Zambia as a Chilean-Chinese joint venture, M.E. Long Teng Zambia Limited.

“This is a win-win scenario not just for North-Western province, but for the whole of Zambia,” says Kabungo, explaining the economic benefits.

“It’s the multiplier effect in action,” says Kabungo. “An initial investment is magnified and multiplied several times over, generating business activity and employment far away from the source of the original investment.”

This business activity and employment has already started. On any given day at the construction site, some 80 people are employed in laying the foundations for what will be one of the largest industrial buildings in Kalumbila. In a few months’ time, when the building goes up and machinery is installed, there’ll be up to 150 people working on-site.

“Kalumbila is already feeling the effect of this economic activity,” says Kabungo. “Construction workers need to eat; they need to buy fuel; they need accommodation – Impala Suites, the town’s main serviced accommodation, is often full. And there are enquiries for school places for the children of the people who will live and work in the town once the plant starts operating.”

There’s a tangible feeling of excitement in the air at Kalumbila with the coming of the M.E. Elecmetal plant. The fact that it is now actually under construction, and not just an idea on the drawing board, has caused a flurry of interest from other international investors. According to Kabungo, the major shareholder of an Australian engineering company visited the Elecmetal site and the industrial zone in July 2017, and is keen on building a pipe-extrusion factory nearby. It would supply specialist piping to the mining industry that currently has to be shipped in from Australia. That would mean cheaper piping for the mines, and increased employment and business activity for Kalumbila.

Another Australian company, Argonaut Exploration, is busy prospecting for copper in the surrounding area on behalf of Antofagasta, one of Chile’s main copper-mining companies. A major Ndola-based earthmoving company doing the earthworks for the Elecmetal plant, Joe’s Earthworks and Mining, is considering setting up in the town.

“It’s significant that all this activity is focused here around Kalumbila, rather than more developed Solwezi,” says Kabungo. “It’s an illustration of Kalumbila’s strategic location relative to export markets like the DRC and Angola, as well as the attractive tax incentives that investors are able to negotiate with the government of Zambia.”

It’s not just Kalumbila’s industrial zone that is becoming the focus of fresh investment. An entire neighbourhood of 50 new houses is nearing completion near the town centre, thanks to an investment of $1.4 million by Zambia’s Workman’s Compensation Fund Control Board. It is the largest single private investment since the town was built. The Fund has signalled its intention to build a further 100 houses, with a total investment value of more than $3 million. Besides increasing the size of the housing pool in Kalumbila, these investments allow the Fund to broaden its investment portfolio by diversifying out of government securities.

“The increasing private investment in Kalumbila is squarely in line with the founding vision of First Quantum Minerals to build a thriving, self-sufficient town capable of outliving the mine when it eventually closes in 25 years’ time,” says Kabungo.

It is the hope of the Kalumbila Town Development Corporation that the latest investments will create a snowball effect and produce even more investment. Hopefully, this will produce a greater sense of urgency in government to speed up the granting of land-title and commercial permits to investors, and to assure the electricity supply necessary to power Zambia’s newest and fastest-growing town