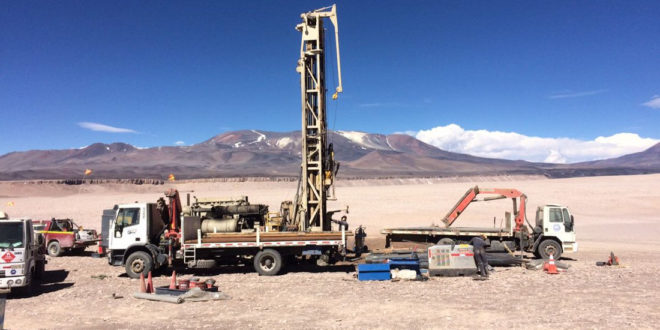 Wealth Minerals, a company focused on the acquisition and development of lithium projects in Chile, South America is finalizing a drill contract and expects to begin drilling before the end of May 2018 at its Trinity discovery.

“Wealth holds the largest portfolio of lithium brine projects in Chile and our recently announced partnership with ENAMI has paved the way for development of those projects.”

With this critical partnership, the Company has shifted priorities from accumulation of projects to systematic technical evaluation to determine which projects will be prioritized moving forward, especially now with the ENAMI alliance that allows both Companies to move the projects forward quickly.

Henk van Alphen, Wealth Minerals’ CEO, stated: “The worldwide demand for inexpensive and accessible lithium is on the verge of a dramatic spike with the continued implementation of new transportation and communication technologies and an ever-increasing demand for energy-storage solutions.

Wealth’s project portfolio is poised to become an increasingly important factor in the global lithium industry, and we have a visionary strategy for bringing this essential commodity to market.”

“Drill testing of targets at Trinity is an important step in a process that will see several projects evaluated by the end of H1 2018.” Mr.

Multiple anomalies are identified within the survey area with several drill targets southwest of the surface brine area. These targets represent the highest priority for exploration as they have the highest tenor conductivity (lower resistivity) suggesting greater saturation and/or higher salinity.

The drilling program is scheduled to drill three holes using a sonic drill rig to a depth of 400m each, collecting brine samples at 50m intervals.

Management expects the drill rig to be at site by the end of May and to have completed the drill program by June.