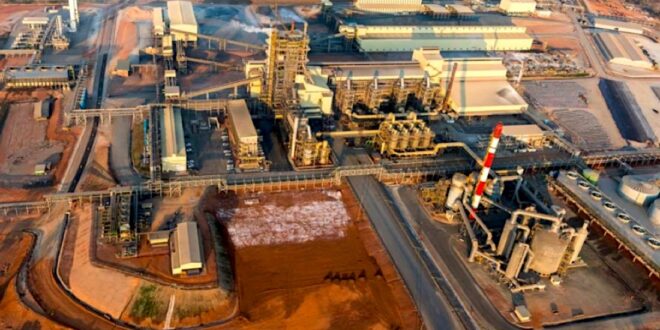 As the mining firm focuses on delivering disciplined and responsible growth

Globally the company achieved its highest-ever annual copper production of 816,000 tonnes, a 5 per cent increase from 2020, but this was attributed to record production at its new Cobre Panama mine and the resilience of its other operations. Copper production in the fourth quarter of 2021 was 201,000 tonnes.

Copper production at Sentinel Mine in Kalumbila was 233,000 tonnes for the full year and 61,000 tonnes in the fourth quarter of 2021, 18,000 tonnes and 2,000 tonnes lower than 2020 levels, respectively. 2021 performance was impacted by the failure of train ball mill machinery in the first quarter and a lower grade profile, however, record quarterly throughput was achieved in the fourth quarter.

Meanwhile, Kansanshi Mine in Solwezi achieved copper production of 202,000 for the full year, 19,000 lower than 2020, reflecting the depleting oxide ore in the maturing mine and that copper production in the fourth quarter of 2021 was 52,000 tonnes, a reduction of 1,000 tonnes from the same period of 2020 because of lower grades and oxide recoveries.

Plans to invest in additional production facilities to process lower-grade ore were contingent on a more favourable fiscal regime, the company has said previously.

Total copper sales volumes, in particular for the product from Zambian sites, were also impacted by port availability and operational issues, as well as global container freight constraints. Although the bulk shipping sector was less affected by the global supply chain and freight-related constraints, vessel freight costs were higher than the average over recent years.

Speaking as the mining firm announced its 2021 Preliminary Production, FQM Chairman and CEO Philip Pascall said: “First Quantum continues to be focussed on delivering disciplined and responsible growth, which is reflected in the strong increase in our copper and nickel production through the guidance period,” he said.

Mr Pascall further said the mining firm’s commitment was to reduce total debt to levels appropriate for its business and that the targeted debt reduction programme of $2 billion was expected to be completed by the first half of 2022.

“We remain committed to reducing our debt levels, whilst at the same time cautiously increasing capital returns to reflect the robust financial outlook,” he continued.

The mining firm further announced that it had set tangible targets with an identified realistic path to reduce our Green House Gas emissions by 50 per cent by 2030 and that the achievement of these targets was not expected to result in significant increases in capital expenditures or operating costs from previous forecasts.

“At First Quantum, we are committed to extracting resources responsibly and the importance that we place on sustainability is an intrinsic part of everything we do. We are pleased to have identified tangible solutions to significantly reduce our greenhouse gas emissions and to contribute to the global energy transition by delivering the critical metals required,” Mr Pascall continued.