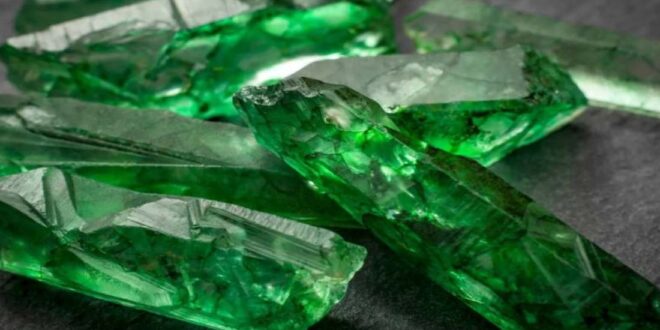 Minister of Mines and Minerals Development Hon. Paul C. Kabuswe revealed that all Zambia needs to do is to organise and provide leadership, transparency, integrity and governance for the prosperity of Zambia’s gemstone future.

Kagem Mining has reinforced the Zambian government’s optimistic outlook for the future of Zambia’s gemstone and wider mining sector.

Kagem hosted the Minister of Mines and Minerals Development Hon. Paul C. Kabuswe, MP at its mine site in Lufwanyama he recently toured the gemstone rich district to gain a better understanding of the operations and activities of the mines.

“All we need to do is to organise and provide leadership, transparency, integrity and government and the people will get what is due to us. From the path that especially Kagem Mining has shown us, I think we are going in a positive direction and Zambians are going to benefit from these mines,” said Hon. Kabuswe.

The Kagem emerald mine is 75% owned by London-listed Gemfields, in partnership with the Zambian government’s Industrial Development Corporation (IDC), which owns 25%.

Hon. Kabuswe noted that now more than ever – and in light of the Covid-19 pandemic – the government was determined to provide the necessary leadership, structures and policies that would see the mining sector thrive. He stressed the need for transparency in the sector, a view that is shared wholeheartedly by Kagem and the parent company, Gemfields, as this is critical in ensuring that the correct information is relayed to stakeholders and for the country to benefit from the sector.

The Minister was further impressed with the mine’s response to and handling of the Covid-19 pandemic that saw most companies either scale down or close. Kagem was significantly affected, with a suspension on operations in place for a year from March 2020, and yet the mine-protected the jobs of every employee, continuing to provide salaries and sheltering employees from redundancy despite negligible revenue and zero productivity. Kagem restarted operations in March 2021 attaining full capacity in May 2021.

Kagem Chairman Dr Sixtus Mulenga elaborated on the matter, highlighting that because Gemfields places value on long-term commitment and investment, it was important to protect the company by looking after the welfare of its employees during this time:

“What happened at Kagem was very unique; despite the mine closing its operations, it kept employees paid for the whole period of 2020. We are the only gemstone company that did that, despite not producing and only operating on expenditure which was provided for by the mine’s parent company and main shareholder – Gemfields.”

Dr Mulenga said the mine had shown resilience and was expected to announce a profit for 2021 as well as declare dividends later in the year. Kagem has a projected life of mine of 25 years and is the largest contributor of taxes to the government in the gemstone sector, having pioneered a new level of transparency across its auction and sales process. This system allows government officials to oversee the entire sales process and observe the full sales value being repatriated to Zambia, ensuring that all due taxes are paid in full.

He further commended the government on its positive stance on investment in the country:

“The New Dawn government is the most business-friendly government we have had in a long time in Zambia. They have declared a tax regime which is predictable and investor-friendly, and we are delighted as investors to work with such a government.”

Gemfields acquired 75% of Kagem in 2008, at which point Kagem’s revenues were just USD 8 million per annum. After much investment and adopting a policy of transparency, Kagem’s annual revenue grew to USD 80 million, a ten-fold increase. Since the take-over of Kagem by Gemfields in 2008, Kagem has achieved cumulative revenues of USD 749.7 million, all of which has been fully repatriated to Kagem and Zambia, with no “profits” being booked overseas.

This means Zambia saw the full international value of its emeralds delivered back into Zambia. During that time, Kagem has paid approximately USD 142.7 million to the government of Zambia in the form of corporation tax, mineral royalty and dividends, equivalent to 19% of the total revenue. Kagem is currently on a growth path that will hopefully see it double its production and revenue over the next few years, which suggests a bright future ahead.

“We plan over the next few years to move our production and revenue almost to double so we are very excited. Kagem produces around 38 million carats per annum and with annual revenue of just under USD100 million,” said Dr Mulenga.

“Kagem is now the leading emerald producing mine in the world thanks to the excellent partnership with the government, and with the positive direction and stance on the sector that the current government has taken on, we are excited and hope to do even better with this partnership,” conveyed Dr Mulenga.