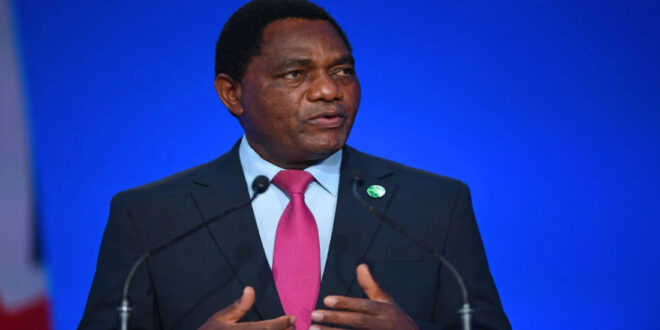 Evans Mumba January 28, 2022 News, Promoted, Top Stories Comments Off on ‘IMF now understands the need for growth and opportunities in our countries’ 3,030 Views

“The continent, including Zambians, haven’t understood that there have been a lot of changes in the IMF,” said Zambian President Hakainde Hichilema, who won the presidency in August 2021. “The IMF of today understands the need for growth and opportunities in our countries.”

Hichilema, who is seeking to ratify a $1.4bn (R22bn) bailout loan from the IMF, says controversy about borrowing from multilateral organisations is often driven by outdated ideas of how the organisations operate.

The visit to SA by Hichilema, who is often compared to President Cyril Ramaphosa because of his history as a wealthy business person who later took the highest political office, came about a week after the confirmation of a $750m World Bank loan for SA to help deal with Covid-19. At the height of the crisis, SA took a $4.3bn loan from the IMF, breaking somewhat of a taboo, as the ANC has seen taking such loans as inimical to national sovereignty.

While the loans come at much lower interest rates than the countries would get in the market, the opposition has centred on concern that conditions from the lenders, including reductions to public spending that may impose costs to the population, would force governments into unpopular and damaging policies. Zambia was once was seen as one of the poster children of the dangers of taking such “structural adjustment” loans, something that has not been applicable in Covid-19 lending.

“The IMF knows that if we have no social programmes for the vulnerable, there will be resistance,” said Hichilema.

“When there is resistance, it means we cannot implement the necessary restructuring measures, including institutional strengthening.”

Having taken over an economy wrecked by runaway borrowing by his predecessor, Edgar Lungu, Hichilema has prioritised getting an agreement with the country’s creditors.

He used the visit to convince potential investors in SA that there is a “new team in town” that welcomes and encourages foreign capital in its mining industry. Africa’s second-biggest copper producer wants to benefit from the metal’s new lease on life as it plays a crucial role in new industries such as electric vehicle batteries and semiconductor wiring. Boosting revenue from mining is seen as crucial to Zambia’s prospects and to putting its debt on a more sustainable trajectory.

Zambia in November 2020 became the first African country to default on its debt in the wake of the Covid-19 outbreak, stopping debt service payments on $3bn of Eurobonds. It also struck a deal to delay payments to China, while talks with private-sector creditors are ongoing.

The Covid-19 crisis saw the country’s fiscal deficit reach 12% of GDP and debt as a percentage of GDP jump to 118%, according to a report by Fitch Ratings.

In what was seen as a sign that Zambia had turned a corner with new leadership, the country reached a $1.4bn agreement with the IMF in December 2021 for a three-year credit facility.

That was just a “staff level” agreement, and the money will not flow until the IMF board approves it. And that would be reliant on Zambia reaching an agreement on economic and financial reforms under the so-called G20 common framework to convince lenders that its debt is on a sustainable path.

Hichilema said he is confident that a deal will be reached to enable the country to access the funds during 2022.