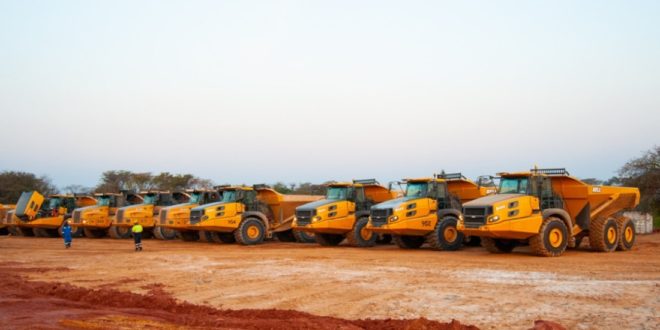 “We have had success with our ReMan re-power programme through which complete rebuilds of articulated dump trucks (ADTs) are undertaken to provide a second life for equipment at reasonable prices,” says Bell Equipment Zambia MD Mike Quin.

“These machines have done between 16 000 and 18 000 hours. We’ve decided to take this route because the new taxes [in Zambia] on gemstones have cut into our bottom-line profits,” explains Kagem Mining GM Prahalad Kumar Singh.

He points out that, as the refurbishment will add a further 8 000 to 10 000 hours to the operating life of these ADTs, “the cost involved is workable, as we can capitalise it and then depreciate it, which gives us a tax advantage”.

While 2018 was a successful year for Bell Equipment in Zambia, with the company enjoying full support from the country’s ADT mining market, a decline in volumes is expected in 2019.

“This year started off well and we have had seven months of good ADT sales, but the rest of the year is looking slow primarily because of the uncertainty created by the possible introduction of Zambia’s new sales tax,” says Quin.

Demand for the Bell equipment range comes primarily from the country’s emerald and copper mines in the Copperbelt region.Bell offers the Zambian market 18 t to 60 t ADTs and has been successful in selling its B40E and B45E units to the country’s large emerald mines.

In recent years, 20 ADTs have been sold to the two largest emerald mines in the world – Kagem and Gemcanton, both in Kitwe – while other large trucks have been sold to mining contractors working at Konkola Copper Mines, one of Africa’s largest integrated copper producers.

“With three operating pits and our main pit having a strike length of 2.2 km and 130 m at the deepest point, Kagem is the world’s largest emerald mine,” says Singh. Kagem is 75%-owned by Gemfields and 25%-owned by the Zambian government.

In 2018, an expansion project at Kagem necessitated the replacement of some of the mine’s older fleet. Bell Equipment supplied 12 Bell B45E ADTs, a 37 000 ℓ water bowser on a B45E chassis and a Bell 225F tri-wheeled tyre handler.

Delivery took place in phases between August and October last year. All the machines included an extended warranty of 10 000 hours on the wet drivetrain.

On average, the new Bell B45E fleet runs for 18 hours in a 24-hour cycle, seven days a week, with fuel consumption between 28 ℓ/h and 30 ℓ/h. In addition, the Bell Fleetmatic package supplies Kagem’s fleet management with comprehensive feedback on machine performance.

Kagem aims to recover 250 ct for every tonne of ore mined but, even then, only about 25% to 30% is saleable product.

“From that small percentage, a mere 1% will be premium-quality product and provide about 65% of the mine’s revenue. Therefore, we have to move as much soil and rock as quickly and cost effectively as possible to mine accurately and profitably,” Singh explains.

He adds that Bell Equipment provides Kagem with a distinct advantage, as the company’s machines are produced in Africa for African conditions. Subsequently, parts are readily available, which is a hugely important consideration in isolated areas in Africa.

“There is no bureaucracy created by franchising, which causes delays in delivery, and you can discuss a problem with someone you know, especially with Bell Equipment’s customer service centre in nearby Kitwe,” notes Singh.

Bell has been operating in Zambia since 1994 and, in 2015, invested $8-million in the construction of modern offices and workshops to support its strategy of offering first-class equipment and after-sales support.

Bell has started to promote its low-profile underground trucks to the Zambian mining industry and expects to experience good market growth, owing to these machines, in the years ahead. The company currently offers a 33 t unit and is working on developing larger underground trucks.