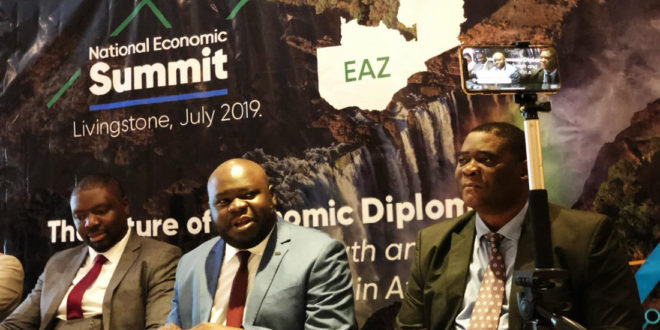 Economic pinch due to international advances

At the first National Economic Summit organized by the Economics Association of Zambia, minister of Finance Dr Bwalya Ng’andu voiced concerns that developments in the international economy had not been supportive to the local economy.

At the summit, held in Livingstone, Dr Ng’andu noted that Zambia’s economy has been poorly affected by developments in international markets resulting in low prices for goods.

The minister added that the situation worsened by negative market sentiments that in the second quarter of the year impacted negatively on the exchange rate of the Kwacha against major convertible currencies.

“Liquidity conditions have been tight, adversely affecting businesses around the country and constraining economic activity.”

“We have also encountered declining fiscal space for developmental projects as most of the resources have been utilised on debt service and other obligations that have a first call on the treasury,” Dr Ng’andu said.

With the summit being under the theme “The Future of Economic Diplomacy: Supporting Inclusive Growth and sustainable Development in Africa,” the minister advised participants in attendance to come up with strategic plans on how the economy could be reinvigorated.

President Lungu  indicated that ongoing infrastructure development in the road sector is an initiative that is earmarked to make Zambia a land linked Country in the Southern Africa Development Community.