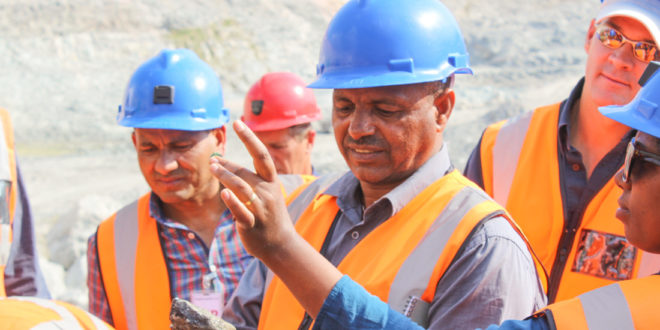 Kagem emerald mine has opened its doors to top Ethiopian Mining officials for a fact-finding mission to Zambia to enable them get a better picture of how they might promote the development of Ethiopia’s emerging gemstone mining sector.

The economic impact of emerald mining in Zambia was a particular highlight for the Ethiopian delegates, led by the Director of Mineral Licensing and Administration Directorate Sisay Ayalew Amera, who visited the Kagem mine in Lufwanyama and later attended Gemfields’ emerald auction in Lusaka, along with other colleagues from the Ethiopian Ministry of Mines, Petroleum and Natural Gas and Gemfields’ Ethiopian partner Mazengia Demma, Managing Director of Maz Trading.

The delegation was interested in learning how Kagem is contributing to the growth of Zambia’s emerald sector, its impact on job-creation, and the marketing efforts which have led to increased global acclaim for Zambia’s green gemstones.

Kagem shareholder, Gemfields holds an emerald exploration licence in the south of Ethiopia. Gemfields, also owns 75 per cent of Kagem, and is a world-leading supplier of responsibly sourced coloured gemstones with Kagem accounting for approximately 20 per cent of global emerald production.

The mine is operated in a model partnership with the Zambian government, which owns the remaining 25 per cent.

Mr. Amera said he was impressed with Kagem’s operations after being given a guided tour to learn what it takes to run the world’s largest emerald mine.
“We went from the mining pit, to the sorting and grading facility and what we saw was fantastic. We hope to see Gemfields directly duplicate what they have done here in Zambia, or even do better, back home in Ethiopia,” he said.
Mr Amera expressed optimism that Gemfields would use the experience and expertise it had put to such great use in transforming the gemstone sector in Zambia to put Ethiopia’s gemstone industry on the world map.

Gemfields Chief Executive Officer Sean Gilbertson expressed that the company is looking forward to leveraging their insight and expertise to further build this appreciation both within the industry and amongst consumers.

“Though largely known for its quality opals, Ethiopian emeralds are gaining international acclaim in their own right, ” he said.

As one of the largest taxpaying mining companies in the country, Kagem has achieved cumulative contributions to the government exceeding US$104 million since 2007: US$13 million in dividends, US$34 million in royalties and US$57 million in corporation tax.

Further, Kagem has developed a Community Sustainability Development strategy that sets out planned projects with the agreement of local stakeholders. This strategy is strategy directly in line with Gemfields sustainability strategy to support health, education and agricultural projects in the two local chiefdoms thus enabling Kagem to have a more transparent, equitable and interactive relationship with all local stakeholders.

Some of Kagem’s community projects include a focus on Chapula Secondary School and Nkana Health Centre spending close to US$2 million, which were commissioned in October this year by the President of Republic of Zambia, His Excellency Edgar Chagwa Lungu.

The mine has also co-guaranteed interest-free loans for user-friendly treadle pumps to enable the farmers to irrigate their land outside the normal rainy season, ensuring a more consistent year-round water supply.

Kagem and its parent company Gemfields are investing in exploration, mining, sales and marketing, to develop a competitive, reliable and trusted source of responsibly sourced gemstones. Simultaneously they are setting new benchmarks in environmental, social and safety standards in the coloured gemstone sector.