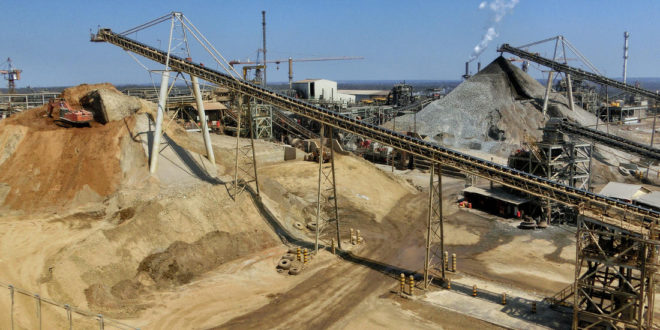 The company’s 2016 financial results confirm its status as Zambia’s flagship copper mine.

“We are a world-class operation in terms of technology, people and operations,” says Assistant General Manager, Meiring Burger.

“We face one of the most complex ore bodies in the world, but we mine it by using world-class technology and expertise. Our people are always pushing the boundaries and trying out new technology, which is what you have to do when you are mining low-grade copper.”

Kansanshi is also Zambia’s largest gold mine, and produced around 120 000 ounces of gold in 2016, amounting to about 10% of its revenue.

The key driver of Kansanshi’s continuous improvements in operational efficiency and productivity is constant innovation – sometimes in seemingly insignificant areas of operation.

One example is Trolley Assist, a system that provides Kansanshi’s 180-tonne haul trucks with electrical power on steep inclines, and saves more than $6 million a year in net energy costs.

Another is the use of GPS-equipped blast balls to improve the efficiency of blasting.

But by far the biggest technological leap at Kansanshi in recent years is its new $900-million smelter, which has dramatically boosted its production capacity. It has an annual production capacity of finished copper anode that ranks it among the top smelters in the world.

“Over the years, we have created our own opportunities through investment and innovation,” says Burger.

“We need to maintain that investment into the future to extend the life of the mine and to maximise the value of the mineral deposit, but it’s not as simple and straightforward as before.”

The power deficit is the most pressing of these challenges, and currently it constrains the viability of any planned mine or smelter expansion, says Burger.

The ability to hire expatriate miners – or expats – is another challenge, says Burger.

Although expats account for less than 6% of Kansanshi’s workforce (a globally very competitive number), they play a central role in training and mentoring local employees in order to increase the Zambian skills base.

“Expats are critical for our success in a competitive, global market,” says Burger. “They bring in vital expertise in implementing new technology and global experience. They allow us to exploit modern technology fully to remain competitive.”

Infrastructure is another area of concern. Burger cites the Solwezi-Chingola road, the key export corridor for copper produced in North-Western province, and a lifeline for Zambians travelling to and from the Copperbelt.

“We’re spending $150 000 to $200 000 a month patching potholes and keeping the bypass roads passable – and that’s after the $4 million we’ve just spent on reconstruction in recognition of the central role the road plays in the Zambian extractive sector supply chain and in the local communities as their principal means of communication,” he says.

“North-Western province is producing most of Zambia’s copper and paying a significant portion of its taxation, and it would be a positive move to see more of that money reinvested for the benefit of the people living and working here.”

There is a lot riding on continued investment at Kansanshi, for it would help to extend the life of the mine, and ensure continued economic prosperity for North-Western province, the article concludes.