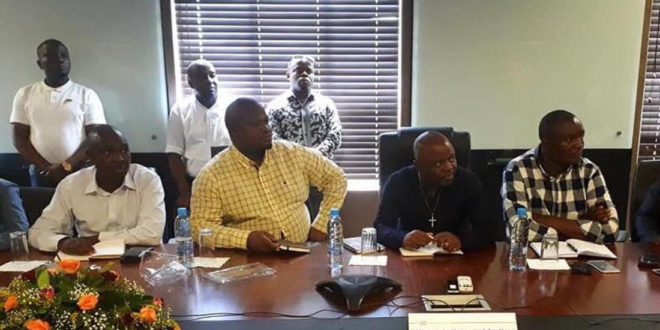 Konkola Copper Mines has announced intentions to bridge information and expectations gap that currently existing between the mine, the workers, the Unions, the local contractors and government.

The company operates Copper mines in Chingola and Chililabombwe.

Steven Dinn, KCM Chief Executive Officer said that the meeting was a start of the new era and that the mine management will work on what they are not doing very well as they should.

He committed that KCM will work at closing all the actions that had been agreed during the meeting with the high powered Government team.

New Mines Minister, Richard Musukwa stated that KCM is expected to normalize its relations with its workers and the unions.

He stated that KCM should also look at its other mines at Nkana and Nampundwe to ensure a win-win situation.

The Mines Minister also stated that KCM should endeavor to use locally trained expertise, some of whom are managing large mining operations even in foreign countries.

“There is this issue of foreign workers being issued with permits even for jobs that Zambians can do.”

He said that government has noted that all key contracts are given to foreign contractors and suppliers at the expense of local Zambians who are equally capable of doing the jobs.

KCM has recently come under heavy scrutiny and criticism from its local workforce, the mine workers unions and local contractors following the mines decision to outsource some the key mining activities to foreign contractors at the expense of the locals.

The unions and workers have resisted the move citing the fact that the new mine contractors conditions of service are inferior to the current one.

The workforce have asked KCM to rather declare them redundant and pay them off their terminal benefits rather than transfer them to the new contractors, whom they fear may even fail to pay off their accrued benefits.