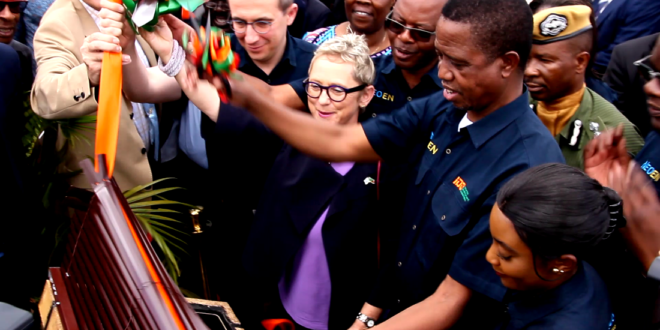 The President of the Republic of Zambia, Edgar Chagwa Lungu commissioned the first ever large scale solar plant in Zambia.

The 54 Megawatts Bangweulu Solar power plant located in South of Lusaka was constructed a a cost of US$56 million.

The Bangweulu solar power plant currently has 453, 000 solar modules and will inject approximately 100 gigawatts of electricity into the national grid annually at a tariff of US 60 cents per megawatt hour.

Speaking at the commissioning ceremony, President Lungu thanked the financiers, developers and all stakeholders who have made the solar plant a reality.

He has since directed the Industrial Development Corporation (IDC) to accelerate all other renewable energy projects which are in the pipeline.

The President has also observed the need for ZESCO to co-exist with the private sector in developing the Country’s energy sector.

President Lungu noted that the private sector in the Country has shown great interest to invest in power generation.

The Head of State notes that with the high demand for power in Zambia and in the region, there is need to leverage this opportunity by attracting more players in the Country’s energy sector.

Speaking at the same ceremony, Mateyo Kaluba IDC Chief Executive Officer assured President Lungu that the next solar plants will not take long as the commissioned Bangweulu solar power plant has taken.

The France based company-Neoen Chief Executive Officer Xavier Barbaro made mention that the Bangweulu solar plant is one of the biggest solar power plants his company has worked on in Africa so far.

Meanwhile French and US Ambassadors to Zambia Sylvain Berger and Daniel Foote have offered their countries’ support to Zambia’s venture into renewable energy.

Mr. Berger says France has more companies that can partner with IDC in the energy sector while Mr. Foote called for continued commitment to investment in renewable energy in Zambia.

This Multi Economic facility is expected to power approximately 30,000 households.