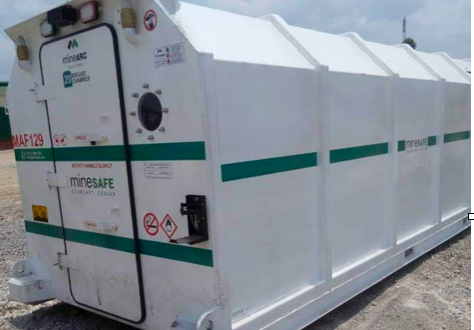 Lubambe Copper Mine has procured the first ever self-contained mine Emergency Refuge Chambers in Zambia. The consignment of five refuge Chambers has been procured at a cost of US$ 475,000 from Mine Arc Systems of Australia.

Lubambe Mine Communications Manager Loyce Saili said the procurement of the refuge Chambers by the copper miner is a move toward enhancing Emergency Response in case of mine accidents arising from fire, explosions, flooding and release of smoke and other forms of toxic gas.

Speaking yesterday during the media site visit at Lubambe Mine in Chililabombwe, she added that the refuge Chambers are with vital life support systems to create a safe, ongoing environment for occupants.

She further narrated that the system include, oxygen supplies, air conditioning system, electrical system, gas detection system and CO2 and carbon monoxide removal system as well as communication system, camera, seats of 20 in each and chemical toilet.

“Safety is our number one priority, we want our miners to be safe through ensuring preparedness for any eventuality,” Saili stated.

And General Manager Tony Davies said the chambers will be placed underground in the coming months and the workers will under go training on how to operate the equipments.

He also said the Chambers will last forever and has the capacity to accommodate above 20 people during an emergency, as what is required is the increase in oxygen supply.

Lubambe Copper Mine is a large-scale underground Mine owned by EMR capital of Australia who have 80 percent shares and ZCCM-IH who hold 20 percent.